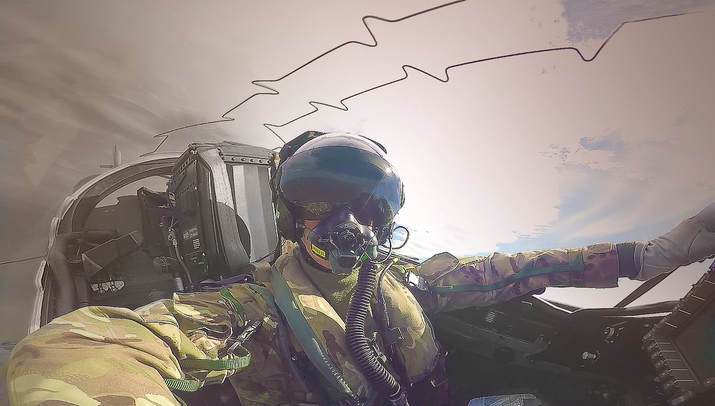 ‘Well, that’s the flying done.’ I thought, as the jet slowly rolled to a stop.

And, as I moved the throttle to the closed position, I knew it would be the last time I ever flew a fighter jet. I opened the canopy and, as the engine wound down and took the generator offline, my screens turned black.

I could see the crowd walking out from the Squadron carrying the fire extinguishers with which to spray me, just like I’d done to many of my pilots before and yet, I felt little emotion.

I had a last look around; it was a familiar and comfortable environment but one I knew could have killed me at any moment.

Like the family dog you think you know well, right up until it bites you.

But, I hadn’t been bitten.

I’d flown these machines for many years and by luck, judgement and the work of some exceptional engineers, I’d brought them all back home.

Nope, it all looked good – I stood up on the ejection seat and stepped outside to meet those who had come out to celebrate the end to my twenty years in military fast jet aviation.

My mind went back to a few months earlier when my wife and I were attempting some amateur landscaping in a house we’d just bought.

‘That’s the most stupid thing I’ve ever seen!’ she said as we stood together in the garden looking at a bottle I was holding.

It was covered in mud and I’d found it lying next to a heap of bricks that hadn’t been moved in years.

‘Well,’ continued my wife ‘you’ll have to get that snail out first.’

As we looked inside, what we saw was the epitome of stupidity, something so idiotic it was beyond humour.

A snail had made its home inside the bottle but, by doing so, it had grown too big to ever leave.

‘That snail is an idiot!’ said my wife ever helpfully, and with a ‘Good luck, dick snail!’ she went back to digging up the driveway.

I carried the bottle over to the garden table, leaving it there whilst I went inside to make some tea.

The more I considered it, the more I thought what the snail had done was actually quite clever; the bottle protected him from predators and gave him ample food in the form of plants, fungi and algae.

But, by staying in his comfort zone for too long, he had unwittingly become a permanent tenant and could now never leave.

I thought little of it and, as the weekend came to a close, my mind went elsewhere to the flying I was to do the next day. I could feel a sense of frustration building up in me that had become all too common over the last few years.

It was something I’d flown with for a while and I’d originally put it down to demanding bosses who lacked emotional intelligence or just the chaotic life of middle management on a fast jet squadron in a military that was being repeatedly hit by budget cuts.

A few years ago, I’d started to write about my experiences as a cathartic outlet with which to explore my frustration in the hope an answer would miraculously appear.

But now, as I sat drinking tea with my new friend, the Bovril Snail, it was obvious…

In fact, it was worse – I was stagnating.

In aerodynamics there is a point on a wing where the approaching airflow fails to separate and neither goes above or below but stops on the leading edge. It’s called the ‘stagnation point’ and creates an area of high pressure which builds up as the aircraft increases speed.

The longer I flew aircraft, the more I felt I was stagnating – I was standing still, watching the world pass me by.

But my decision to leave flying was a difficult one because the more you invest in something, the harder it is to walk away.

It’s called the ‘sunk cost fallacy’ and is what keeps gamblers throwing good money after bad.

Don’t get me wrong, I’ve only ever wanted to fly. My first memory of aviation is my father buying me a cardboard cut-out airport set and building me a mock-up aircraft using a ladder for wings – it was my absolute passion.
​
But, I’ve written about the dangers of ‘following your passion’ before and, in all honesty, after doing so for the best part of two decades, it takes its toll.

‘The Passion Trap – The more emphasis you place on finding work you love, the more unhappy you become when you don’t love every minute of the work you have.’ – Cal Newport

And, it’s also worth understanding that the more we are exposed to something, the more ‘true’ it can feel. Think of Trump telling everyone that he was going to ‘build a wall’ or Boris Johnson’s promise of a £350 million per week payment from the EU – both false. But, because they were repeated at every opportunity and even written on the side of a bus, they were believed by millions.

The repetition of these statements makes them familiar and develops something called ‘cognitive ease’ which is a term that’s used to show how hard your brain has to work in order to understand something.

Basically, hearing something a lot makes it familiar to us so we tend to believe it.

But, there’s a problem.

This feeling can also be manufactured by the simple repetition of any statement, such as BMW’s ‘The ultimate driving machine’ or Gillette’s ‘The best a man can get’ and these can make people buy things they don’t really want.

But, for me there was one really dangerous one.
​
‘Pilots have the best job in the world’.

After hearing it for so long, I believed it was true.

Flying military fast jets is actually really hard. Not in the sense that a lapse in concentration will make your jet explode, not every flight, anyway. No, hard in that there is a constant level of work to be done in order to remain competent.

And, a lot of it is done at home, when you should be having a break.

Everything about it is demanding – mentally, physically and even socially. Even the places you have to live can be miles from anywhere – the Government puts all the noisy planes far away from things that keep people sane such as other people, towns and culture!

In flying training, Students have to live miles away from their families and know that to fail a trip means the spotlight will be on them – fail another and they’ll get a check ride which they’ll need to pass if they want to keep their job.

Have a bad flight on a Monday morning and you could end your flying career by Tuesday lunchtime.

Pilots all get used to living with the pressure pretty quickly and, as long as you continue to fly in a dynamic environment, it never stops.

But, pressure is good thing if you want to stay alive.

To not feel pressure can often lead to complacency and complacency kills. Interestingly, the more successful you are, the more complacent you often become and all pilots can cite examples of accidents where this has been the case.

In military fast jet aviation there exists a contradiction that says a pilot needs a certain amount of pressure to keep them focused but the continuation of that pressure for too long will, in all likelihood, result in some aspect of mental instability.

That’s why most fast jet squadrons have a three year tour length.

When I was a middle manager on my most recent squadron, I was struggling to keep the balls in the air. It was a fiercely stressful time and in the end I managed to commission an independent review of the squadron’s working practises that allowed us to stop flying and evaluate whether what we were doing was safe.

Doing so probably stopped us having an accident and today, the squadron enjoys a calmer existence.

But, in recent years, like the Bovril Snail who had enjoyed a comfortable and protected life in his little bottle, I realised that I had started to not feel the pressure anymore; I had plateaued at a level of competency where flying military fast jets just wasn’t challenging me any longer.

I was even at the stage where I’d asked the RAF for a desk-job but, because of my experience level, they’d kept me flying jets part-time. So, for the last year or so I flew jets every few months whilst working in an office 250 miles away. Even my wife had questioned whether the title of ‘part-time jet pilot’ was a sensible one to have.

But, I was lucky because one of the greatest things a career in the military ever does for an individual is to introduce them to something called ‘moral courage’.

‘Moral courage is the conviction to do what you believe to be right, even though it might be unpopular or dangerous and the personal cost might be high.’ – Air Publication 1, RAF Ethos, Core Values and Standards

And the right thing was to do was to stop flying.

I was at the point where, if I didn’t control where I was going, something else was going to do it for me.

I’d flown for a very long time and I knew I was in a state of low-arousal yet also in a highly demanding flying environment and, trust me, I’ve buried enough of my friends to know that the two don’t mix.

No matter how many people told me that I had the greatest job in the world or how good at it I actually was, I couldn’t go on doing it if it wasn’t ‘right’.

And, as I taxied back in from my last ever flight, I thought back to the many men and women who had left before me and how I had always said how grateful I was to them for leaving the Service better than when they first found it.

‘Now, go and be a legend and slay some dragons!’, I would say.

And, as I hopped down from the aircraft for the very last time, the boss came over and shook my hand with a ‘Congratulations on a successful ending to a long and distinguished career!’

I took my helmet off, looked him in the eye and said…

‘Thanks Boss, but today is the first day of the rest of my life…

…and this is just the beginning!’

This is dedicated to the engineers on all the Squadrons I’ve flown on but notably 12(B), 208(R) and especially IV(R) Sqn who, without their professionalism, expertise and more importantly, their humour, I doubt I would be here today.
​
​Warriors who fly, don’t always wear wings.