Why the Best Fighter Pilots are Often the Biggest Failures 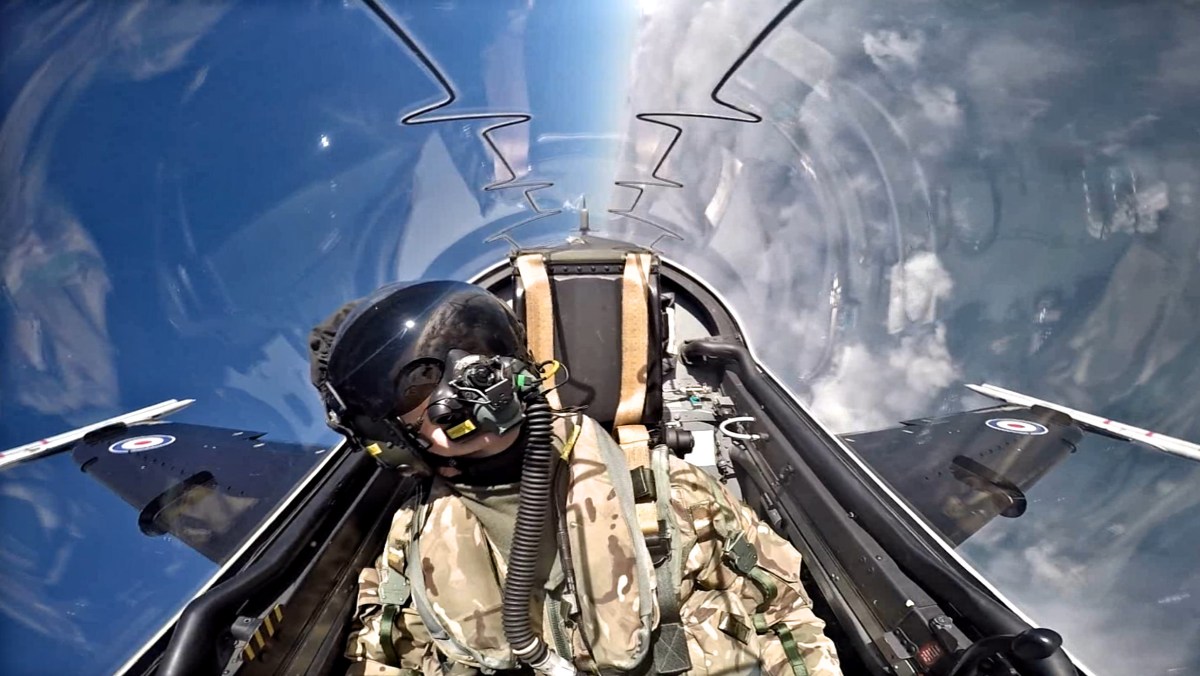 ‘Fail the trip.’ I said to the flying instructor who’d just flown with one of our top students.

He gave me a confused look.

I was expecting it – my demand, to him, was entirely unreasonable. We knew the student well, I’d read her flying reports from her previous two flight schools and from our own Squadron where she was learning to be a fast jet pilot in the RAF. She was excellent; her flying was above average in all respects – she was hard working and well prepared for her flights.

But there was a problem.

I’d seen it before but it was obvious to me that her instructor had not.

‘Fail her trip.’ I repeated.

‘But she flew well, it was a good sortie, she’s a great student, you know this – why should I fail it?’ he asked.

I’ve always been interested in failure, probably due to my own history in flying training. I did well in the beginning, on the small piston-driven aircraft, and then a little better on the larger ones that were faster and had a more powerful turboprop engine. But, it was when I got onto advanced flying training on fast jets that I started to stumble. I put the work in, prepared well, hit the books in the evening but still failed sorties. Some trips seemed to go well, right until the debrief where the instructor would tell me I would need to fly it again; the verdict would come as a shock.

One particularly bad time was halfway into learning to fly the Hawk, the aircraft the Red Arrows aerobatic team use.

I’d just failed my Final Navigation Test for the second time – a key milestone in the course.

My instructor was apologetic, he was a good guy and was liked by the students.

Pilots don’t show emotions; it stops us concentrating on the job so we compartmentalise them and put it in a box on a shelf marked ‘for attention later’ which they rarely get. It’s a curse that will come to affect us in later life as marriages break down after years of neglect caused by a lack of demonstrable vulnerability but today, I couldn’t hide my upset.

‘It’s just a technical fail, Tim – don’t worry about it, you’ll get it next time!’, was all he could say as we walked back into the squadron, the persistent north Wales drizzle adding to my misery.

Failing a flight once is bad. It hits you hard no matter how well you’ve been doing on your course. Often, you can see it coming – you might miss a level-off and bust a height on an instrument departure, stray into an airway on a high level transit or forget to make the weapons switches safe on a range sortie. The flight back is usually silent, the instructor knows they’ll have to fail you for your inattention and you know it too. It’s true that, due to the complexities of the flights, an instructor can fail a student for pretty much anything and often overlooks a lot of small errors – but some they just can’t.

Sometimes, they’d offer to fly the jet home to give you a break and it was often safer that they did.

But, fail a trip twice and the pressure is truly on.

You can tell the students who have failed the same trip twice, they become insular and hide away from their course mates. In fact, their course mates distance themselves from the student, too. They might say that it’s to give their buddy some space, but that’s not true. They’re reluctant to associate with them in case they also start failing trips through some kind of strange ‘unconscious coupling’. ‘Like attracts like’ – pilots want to succeed in their training and falsely believe that failure is of no use to them.

Still, the truth is that, if you fail a trip three times then you’ll normally be removed from flying training. If you’re lucky and there’s capacity at another flight school, you might be offered helicopters or transport aircraft but there’s no guarantee and often it can be career ending.

Brutal but fair and understood by all – nobody said that flying military fighter jets was going to be easy which is why there are fewer fighter pilots in the UK than there are Premier League footballers.

The instructor I was flying with was a good guy and on previous sorties he would often make the ringing sound of a telephone that would continue in my flying helmet until I ‘answered’ it.

‘Yeah, hello Tim, it’s your instructor in the backseat, mate – the good looking one – you might remember me, we’ve spoken many times before. I’m just letting you know that there could be an airway on the nose that you might want to avoid.’

All students know that the instructors are on their side, they want them to pass and the majority will go out of their way to help the baby pilots through their flights. After all, instructors were students too, once upon a time.

To a pilot in military flying training, success is obviously important and is the focal point for the majority of students. They will work late at night, come in at the weekends and watch flight tapes of the other pilots to get a nugget of information that might help them survive another day in flight school.

But for an instructor, success isn’t all that important, there’s something that we are far more interested in.

When I was 10 years old, my dad took me on a tour of Normandy with a military vehicle restoration group that he was a member of. He had a motorcycle from the Second World War that he’d restored and, whist he rode his bike alongside the convoy, I’d be travelling in tanks or jeeps and having a great time.

For a small kid it was a lot of fun and I would chat excitedly with anyone who would listen to me, as we made our way across the various battle sites and spent the evenings camping out in the sun-bleached fields of northern France.

It was a magical holiday that was to be brutally disrupted by my father’s inability to control a gas stove in the dark.

One morning, I was brutally awoken to shouts of ‘GET OUT, GET OUT!’ and dragged violently from the tent.

It was on fire.

Our gas stove had ruptured, igniting the tent door which had set light to the roof and collapsed it all onto the floor below. My father, who was outside of the tent at the time, dived through the burning material, grabbed hold of me and pulled me out by my feet.

We learn from our parents the most, men from their dads and women, their mums. My father wasn’t big on emotions and to this day I also find them hard to display.

He just wasn’t that kind of guy.

But in dragging me from that burning tent, he demonstrated the processing of failure in a way that has never left me.

I remember us sitting on the bank of the river that he’d just thrown our burning tent into. All of our kit was gone and, in effect, we were now destitute. I could hear some people nearby, laughing to themselves about the fact that our home had been destroyed.

He never looked at me but just stared into the distance and I knew, in that moment, that we would be OK, because he said that we would.

And I was only ten, and he was my dad.

And I believed him because, in his voice, there was nothing but humility, authenticity and strength and I knew that in that moment, even though we didn’t have a tent anymore, it didn’t matter.

‘That was my fault, I’m sorry that I set fire to the tent – I’ll do better next time.’ he said, in a rare display of emotion.

And as the tent slowly floated away, we sat by the river and laughed.

My father knew that failure didn’t oppose success, it was an essential part of it. He’d made a mistake and was using it to demonstrate what failure does for someone – it allows them to take ownership of the issue and gives them permission to make improvements.

It helps us learn what works and what doesn’t work.

And, that’s what I told the flying instructor of the student who was about to finish at our flight school.

If she failed on the front-line then she might never recover from it.

The higher you go, the further you have to fall and it hurts a lot more, too. I was interested as to why it hadn’t been done at an earlier stage of training but it’s easily missed.

Our over-achieving student didn’t understand failure; she’d done well educationally and in her Initial Officer Training and had won awards and praise along the way. She was a good student but, whether she believed it or not, her internal narrative was one of continued success and that can be abruptly changed by the reality of front-line operations.

‘Fail her trip because, in all of her flying training, she’s never failed a trip.’ I said.

‘I get it,’ he said, ‘she’s never had to pick herself up. If she fails at something, at night and whilst all alone over northern Syria, she might struggle to recover. At least we can fail her in controlled conditions and help her to return from it.’

That’s why a good school will teach its students to embrace failure and learn to value it more than success. Success is comforting as you don’t have to look deep into yourself – you can pretend you are learning and, in a way you are.

Success is important as it tells you that, what you have done has worked. But, failure builds the foundation that leads to continued growth which can only come from an honest evaluation of your own performance. You don’t need to fail in order to be successful, but you mustn’t believe that failure opposes success and that it needs to be avoided at all costs.

‘A good pilot is compelled to evaluate what’s happened, so he can apply what he’s learned. Up there, we gotta push it. That’s our job.’ – Viper, Top Gun

Failure teaches a person what my father had taught me, before I went onto become the most senior flying instructor of the flight school that I’d struggled through, all those years before.

That’s why military flying instructors know that success alone is fragile and that, only through failure, can the real learning take place.