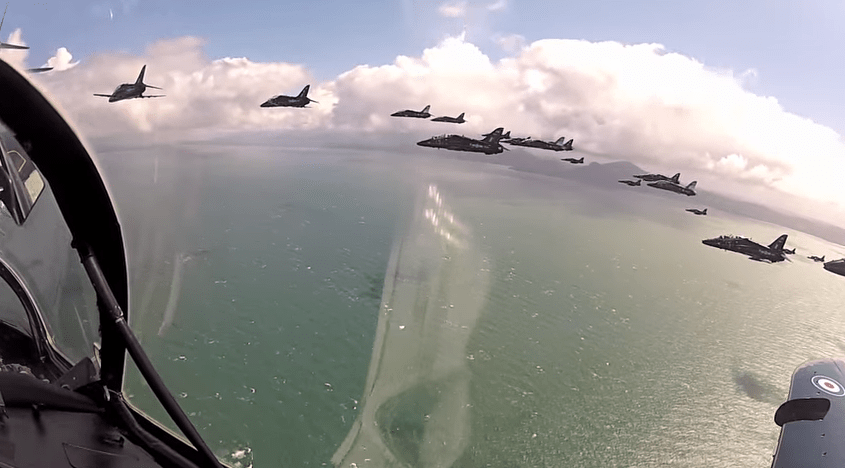 In early 2012, I was flying with a good friend of mine when I made a mistake that very almost killed us both. I was an accomplished jet pilot, as was my buddy, but something happened that was totally unexpected and almost resulted in the loss of, not one, but two of the RAF’s very new and expensive aircraft and four highly experienced pilots.

We were practising for a display that would be conducted in front of the Queen for her Diamond Jubilee Flypast. We were being led by an experienced display flight leader who had recently arrived at RAF Valley and was an ex-Red Arrow. His task – getting 27 Hawk pilots from the RAF and the RN, across four squadrons, to perform as a huge formation that would form the letters ‘EIIR’. The practises were hard and the learning new. It was obvious that in order to be successful in front of the Queen, we were all going to have to embrace failure as a learning tool and many times over.

It was going to be hard work and in essence, to create success in front of the Queen, this work-up was going to have to suck.

Most people, and especially pilots, concentrate too much on the ‘what ifs’ in life. What if I’m not good enough? What if I fail? What if they laugh at me?

Pilots all fear failure. For them, failure is a constant as everyday they are routinely being assessed by their peers. In fact, as most pilots know, to ultimately fail can result in their death or worse, that of one of their buddies. But pilots are still able to climb into the cockpit, everyday, even though they have a fear of failure. You see failure comes in many different forms and for many different people. I know people that cannot and will not speak in front of a crowd, even if they know them really well – public speaking is a human’s number one fear, our second biggest fear is death!

Most pilots recognise that only by highlighting their shortcomings can they ever improve on their performance – this is why we de-brief every sortie for an hour or more. Like pilots, an excellent way of getting yourself to worry less about failure is to go out and fail! That’s right, go and try new things and just allow yourself to fail, often and until it becomes accepted by your mind as a normal thing to do.

‘Our greatest glory is not in never failing, but in rising up every time we fail.’
Ralph Waldo Emerson

Like the majority of pilots, high-achievers and entrepreneurs I am an expert at failing. Let me explain my road to a fast jet cockpit through my failures.

I failed my A-Levels.

But that was just the start. In 1993 I failed at my attempt to join the RAF at the Officer and Aircrew Selection Centre (OASC) at RAF Cranwell and was told never to apply again. I had to go to university to do an HND (and the University Air Squadron wouldn’t accept me because I wasn’t on a degree course) so I had to join the Officers’ Training Corps instead.

I realised that, having failed at my A-levels, I would have to work extra hard to achieve academic success. I went onto study for an Engineering degree which I eventually passed with Honours.

But then I failed my Admiralty Interview Board for the Royal Navy, lack of teamwork was cited as the reason. So for six months I went and played Rugby for Portsmouth Rugby Club and applied again. I passed that Admiralty Interview Board with the biggest difference between first and second attempts ever recorded! Then, once I’d settled at BRNC Dartmouth I almost got back-coursed for pushing my team too hard on a field exercise – oh, and for writing ‘FLY NAVY’ in chalk in huge letters on the parade ground!

When the Sea Harrier was de-commissioned in 2003 I had to transfer to the RAF in order to continue flying jets. I struggled through flying training, failing every test on the Hawk T1 first time around and it was only when I got to the Tornado GR4 that I really started to excel.

Now, in 2015 and, having learnt from my patchy development, I am one of the RAF’s most senior fast jet flying instructors – all from dogged determination and ‘rising up every time I fell’!

Ask yourself, when you were 6 years old, did you request permission to jump around the house dressed as Superman or did you just do it? You see we all need to give ourselves permission to go out and try new things and to hell with what others might think – after all your dreams are yours and no one else’s.

In the film ‘Up in the Air’ – George Clooney’s character Ryan Bingham asks a baby-boomer, that he has just fired, the following question.

‘How much did they pay you to give up on your dreams?’

So, you’ve always wanted to write a book, run a B&B or meditate in a Tibetan monastery?

Maybe, you want to learn to skateboard but you’ve just turned forty?

All of these things are achievable. Maybe your first attempt at writing a book will be awful. But expect it to be and it’ll be less of a surprise for you when it is. Ultimately you’ll learn from your experience for when you write your second book and obvious international best seller! Remember, skateboarding legend Tony Hawk still skateboards and he’s 47.

It’s called ‘self-confidence’ because it only involves ‘yourself‘. In your mind your self belief is your strongest tool for your success. Other people’s expectations and demands shouldn’t impact your ambitions – welcome constructive criticism as it may help you to improve but stay away from outright negativity.

It’s never too late to start doing what you’ve always wanted to do, and yes, the road to success does have many pot-holes and bends that you need to negotiate.

‘I’m practicing my lines. I just got off work and I’ve got an all night shoot tonight. I’m playing a goofy senator in a small independent film. I’m 81 now, and I didn’t even begin acting until I was 76. I always wanted to do it since I was a kid, so I thought it was now or never. I’d love to get just one meaty part in a movie.’ – Humans Of New York

Remember, nobody cares about what you are doing as much as you think they do and you will gain great power when you understand and embrace this truth.

‘What we fear doing most is usually what we most need to do.’

‘I consider our cola venture to be one of the biggest mistakes we ever made – but I still wouldn’t change a thing. Mistakes give you the chance to bounce back and make smarter choices the next time around.’

They’d challenged Coca Cola by trying to be disruptive in an otherwise stable industry and had broken Virgin’s own rules in doing so. People liked Coca Cola and were willing to pay for it. Coca Cola launched an all out war and their larger budget crushed Virgin’s smaller one causing the newcomer to fail. But Branson learnt from it. ‘Innocent Drinks’ co-founder Richard Reed was working for Branson at the time and, using the lessons learnt, launched his product soon after Virgin’s failed business venture and with great success.

Back to my mistake. It was early into the display practises for the Queen’s flypast and all of the pilots involved had gathered, with their aircraft, at RAF Valley. That day there was pressure to fly as the Queen’s flypast date was looming. However, the weather was going to be poor but we all felt that we had a slight chance of getting the practise in. We got airborne and pressed south but soon encountered the forecast low cloud over the sea. One by one the three individual formations gradually descended towards the sea as the cloud forced them lower.

Eventually all 27 aircraft had reached their minimum allowed height of 250 ft.

Mine was a rookie error and one that I hadn’t experienced for many years – I was an instructor teaching advanced jet flying and I thought that I was above such elementary mistakes.

We could all see the weather approaching but to turn a formation of 27 aircraft around takes some time and forethought – eventually the call was made. As the lead aircraft rolled to the right everybody reacted. I was the forth guy in echelon in my particular formation – meaning that I was four aircraft out from the leader and I had one aircraft out from me.

As the lead rolled and, each aircraft responded in turn, it started a ripple in the formation which flowed from the inside aircraft to the extremities – it was fast and getting more dynamic as it went.

Suddenly it reached me – there was nowhere to go!

…and then my low height warner sounded ‘Low height, low height’ – I was below 200 ft and descending rapidly.

I immediately I looked to the front, it was bad – I was facing a wall of sea.

I had to break out but I had another guy on my wing –  I yanked back on the stick breaking away from the formation. Very quickly I realised that the guy on my right wing had done the same thing – I cannot publish how low he got but I can say that we both learnt a lesson that day and the taxpayer was saved a huge bill.

In the debrief I was open about my error in not breaking out sooner. I had become too focused on staying in the formation no matter what – even if it meant flying into the sea. I also spoke about how we all should think critically about taking so many aircraft into weather that might not be conducive to large formation manoeuvring. It was an unusual formation make-up and hadn’t been done in such numbers for quite a while – luckily for us we had a great flight leader whose capabilities far outshone our own.

Over the course of the next few practises many other mistakes were made by many other pilots. It was a tough time but through perseverance and learning from our errors it allowed us all to improve our formation flying. Our flight leader was able to build us into a professional and disciplined formation and one that could present 27 aircraft, in close formation, to Her Majesty the Queen.

If you can learn to focus on embracing failure, use it as a learning opportunity and become persistent in the achievement of your goals then you will truly be on the path to high performance.

Thanks for reading – take a look at two of my instructor’s videos below – both of them are great guys and were passengers for this event! The formation join up you’ll see took over 20 miles to complete!

Enjoy the vids and please leave a comment if you’ve enjoyed reading! – Tim