Impostor Syndrome and The Fine Line Between Confidence and Arrogance 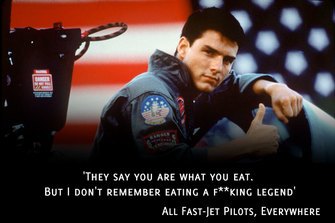 So, it’s fair to say that the majority of the population would probably view fast jet pilots as an arrogant bunch of people who display significant narcissistic attributes.

Any high-achiever whether a race car driver, wealthy stockbroker or famous musician/actor would also most probably be thought of as cocky and arrogant but this is often not the case.

It has been said that the Millennials, or Generation Y (those born in the 1990s), are the most ‘self-satisfied’ and entitled generation yet and they are frequently dismissed as lazy by the baby-boomer generation (those born between 1946-1964).

​In the UK we are currently seeing a shift from hereditary wealth to a meritocracy where hard work and ideas are the order of the day – Generation Y are at the forefront of this change.

Generation Y are confident, connected and open to change

Generation Y are confident, connected and open to change and this can be threatening to other generations who might feel a bit redundant or can’t work ‘them interwebs’. The baby-boomer’s place as the wealthiest generation is caused by 3 things – size, social change (women in the workplace) and education.

​The current class system in British politics is slowly being replaced by a meritocracy. Yes, the new generations are slowly getting wealthier but arguably only because of inherited wealth and a public school education. Michael Young, later Lord Young of Dartington wrote, at the age of 85, of his worries.

Young observed in his 2001 article, “if meritocrats believe . . . that their advancement comes from their own merits, they feel they deserve whatever they can get. They can be insufferably smug, much more than people who knew they had achieved advancement not on their own merit but because they were, as somebody’s son or daughter, the beneficiaries of nepotism. The newcomers actually believe they have morality on their side.”

A confusing picture indeed for generations split apart by many years.

Right now, though, the current generation of movers and shakers are this ‘smug’ Generation Y as Lord Young so eloquently states – they are also the new pilots and high achievers to be found in emerging enterprises such as tech start-ups.

​So, what does this have to do with Impostor Syndrome or confidence and arrogance?

Impostor Syndrome can affect up to 70% of people in the workplace, today

‘It is a psychological phenomenon in which people are unable to internalize their accomplishments. Despite external evidence of their competence, those with the syndrome remain convinced that they are frauds and do not deserve the success they have achieved. Proof of success is dismissed as luck, timing, or as a result of deceiving others into thinking they are more intelligent and competent than they believe themselves to be. Notably, impostor syndrome is particularly common among high-achieving women.’ – Wiki.

Impostor Syndrome affects more women than men and, as a demographic, more African Americans who are thought to suffer from it as a result of positive discrimination policies.

Facebook COO, Sheryl Sandberg, suffers from it and the condition was the basis for her book ‘Lean In’ which promotes the role of women in the workplace.

​Military aviation is an unforgiving business and in my career I have lost more than 30 of my friends – I stopped counting at 30. These are not all from fast jet incidents; I have lost many from helicopter and multi-engine incidents too. I call them incidents because I believe none were accidents; there is always responsibility somewhere whether from pilot or maintenance error all the way up to Governmental neglect and under funding – the subject of another post, I’m sure.

So, if 70% of the population suffers from Imposter Syndrome then does this 70% include pilots?

When I was in training I was fully engaged in my mission of getting to the front line – it was all I could think about. Your whole life seems to revolve around it – our initial training at BRNC Dartmouth or RAFC Cranwell is immersive – it has to be in order to turn you from a civilian into a military Officer.

​Then you move onto flying training which becomes arduous and totally unforgiving, placing you firmly in your stretch zone for months at a time. You see your course mates struggle and fail trips and you might fail the odd trip yourself.

The guy or girl you thought was a ‘sure thing’ for a Harrier or Typhoon cockpit stumbles on a check ride and you start to have massive self-doubt – ‘If they can’t pass it how will I ever be able to?’ Friends are ‘chopped’ around you (removed from training) and, if they are lucky, they might get a chance to be re-streamed onto rotary or multi-engine but, if not, then their military flying career ends.

​You’ve invested so much of your life pursuing this goal that you start to wonder if it’s worth it. The stress can be life changing – relationships end and girlfriends/boyfriends leave. I was once asked by a student who was struggling towards the end of Advanced Flying Training on the Hawk T1 ‘Is it all worth it?’ – he never found out, he was chopped 2 trips later.

If a student is doubting their ability when flying with an instructor in the aircraft then you can be doubly sure that they are doubting themselves when they have to fly solo. At our flying school we have a dedicated ‘Student Solo Outbrief’; this is there to make sure that the authorising officer of the solo student has covered everything necessary to confirm that they are in date for the multitude of currencies and qualifications that they need to fly solo.

This is because the authorising officer has to be sure that the student is going to bring themselves, and the £20 million Hawk T2, back home. The list is extensive – have they flown dual in the last 7 days, did they pass the preceding sortie to a satisfactory level, is their instrument rating fit for the actual and forecast weather conditions, do they have any outstanding currencies and are they in date for the many drills and evolution’s that they need in order to fly as Captain of the aircraft?

​It is extensive and appropriately so but it can also be incredibly daunting for the student as the magnitude of the responsibility they are about to be given starts to dawn on them.

As pilots, their character does not allow them to appear weak in

As pilots their character does not allow them to appear weak in front of their peers so when you ask them ‘Are you happy to take this aircraft by yourself?’ they will always reply with the affirmative. But, away from the squadron, when they are back in their comfort zone with family, friends and maybe even some of their closer course mates, they will reveal the truth – they are scared as hell and, as instructors, we know this.

When we were students we were scared as hell too, not only of doing something wrong and throwing a jet away, but also of failure. The same goes for an instructor who is required to teach a student a discipline that he hasn’t practised in a while. The more dynamic the nature of the flight plus the more aircraft and people involved plus the recency and flying currency of the instructor involved all add up to the level of apprehension felt by the instructor.

This can be huge, the responsibility immense and, in my time as a Flight Commander on the squadron, I have had many instructors approach me with their fears. This is a good thing as it at least means that the communication channels to higher authority are working but the need to manage the variables that are causing the apprehension is very necessary.

So, when we think of a fast jet pilot as arrogant, or even a commercial pilot, who carries huge responsibilities, maybe what you are observing is a coping mechanism which is helping the individual remain confident enough to get into the aeroplane and do the job.

After Andreas Lubitz supposedly flew his airliner into the French Alps, many Germanwings pilots refused to fly the next day – was this truly due to concern over the Airbus design as was cited in the news or was it a display of severe and sudden apprehension?

I recently saw an airline flight roster for a new First Officer who had just joined the company (albeit after a 16 year long career flying military aircraft). Over the year the First Officer’s roster would give him one weekend at home per month. Now, if he had a small family or his wife was working, how much is he going to be at home to support them?

​Not much, I’d guess, as on his mid-week days off his partner is quite possibly at work and cracks in their relationship will, no doubt, soon appear. Now transpose that roster onto a young First Officer straight out of flight school with maybe some financial debt from his flying training and earning not a great initial wage – you now have problems both at work and at home.

A pilot’s arrogance is just an attempt to portray confidence

It is nothing more than thinly veiled Impostor Syndrome that is common throughout society – those that fly aircraft are no different, they are just trying not to get found out either.

But until then, pilots are just not too keen on letting people know that they are all too aware of there own mortality and limited ability.

​So, the next time you think of a high-achieving pilot as arrogant, they are probably just feeling like an impostor which makes them more similar to you than you think.

Until we slip the surly bonds of Early again – fly safe!