How Fighter Pilots Deal with Change and Regulation 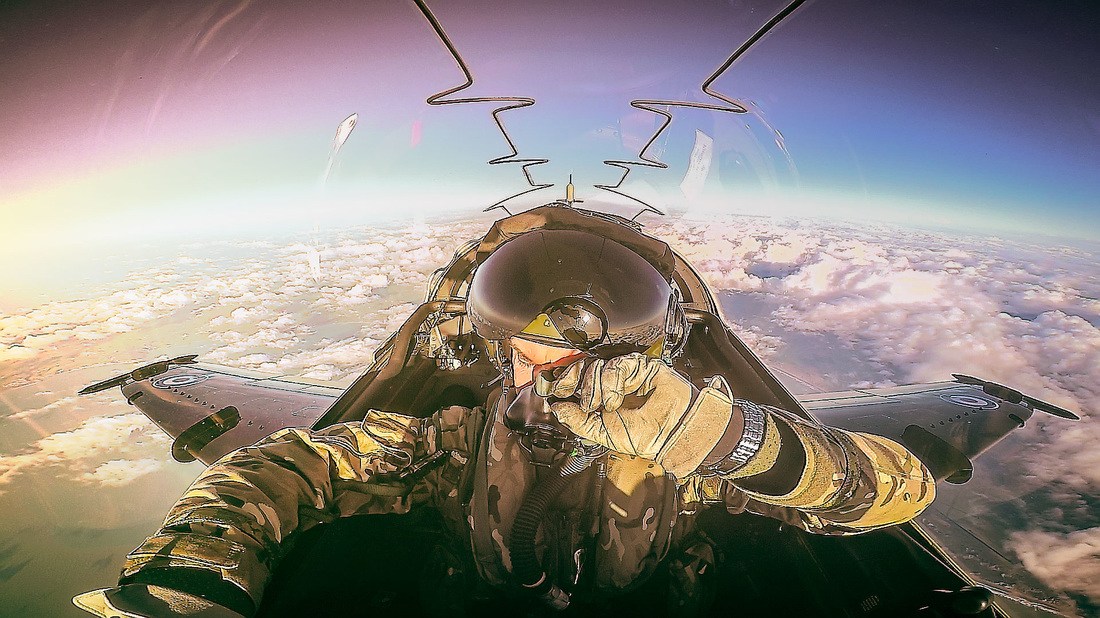 It’s a familiar story to us all. We’re struggling with a heavy workload when along comes the boss and hands us yet another task – we roll our eyes and accept it.

We might even rebel a little and let our boss know how busy we are and we might even believe him when he says that he ‘Understands’ and continues with ‘don’t rush it – Friday will do!’

If your workplace is anything like mine, then you are probably having to ‘do more with less’. Our bosses are output driven, they have to be, and they will attempt to maximise the output whilst minimising the costs. Employees’ salaries are normally the largest cost for any business which is why, when times are hard, jobs are the first thing to go. Recently, when UK airline Monarch transitioned from being a traditional charter carrier to a low-cost airline, they cut 30% of their staff and reduced the pay of those who remained.

Leaning processes are a key management tool, more so in hard times it might seem, and are deemed essential for a company to remain competitive. All well and good, you might think, but how do we know when it’s gone too far?

In UK military aviation we operate under the Military Aviation Authority (MAA) and, having faced a series of recent financial cuts, find ourselves having to think up innovative processes to do ‘more with less’ whilst under this increased regulatory framework.

Banks are a classic example of the effect of inadequate regulation and this has not only been detrimental to their reputations but to the wallets of their shareholders too. Last year, Lloyds was fined £218m by the Financial Conduct Authority (FCA) and US regulators for its part in the rigging of international banking lending rates and today they have been fined a record £117m by the City watchdog for mis-handling payment protection insurance (PPI) complaints.

‘Putting customers first’, ‘Keeping it simple’ and ‘Making a difference together’.

So when they first mis-sold PPI to their customers through complicated processes that elevated their share price I guess that we can all agree that they did make a difference!

The military is not like the banking sector and, when we use words like respect, integrity, service and ethos, we actually mean them.

‘The Military Aviation Authority is an independent organisation responsible for regulating air safety across defence.’

The MAA was established in response to the recommendations made by Mr Justice Haddon-Cave in his Review of a Nimrod incident in 2006, which called for a radical overhaul of military airworthiness regulation.

I have worked directly under the 2* who runs the MAA whilst working on a Service Inquiry into the death of an RAF Red Arrows Aerobatic Team pilot and friend, Jon Egging. I strongly believe in the necessity of the MAA and of external regulators to oversee localised operational procedure but I am also necessarily cautious and aware of the secondary effects that an increase in regulation can cause.

I used to run a team of 12 pilots whose job it was to standardise and regulate the flying activities of the other 50 pilots on the squadron, including themselves. Some of my peers didn’t want to have their teams externally regulated and would have liked to have done it themselves but, as a small, professional unit, we understood that external regulation and validation was both very necessary and appropriate.

Unlike the banks that now have regulation forced upon them because of their reckless and criminal activities, the RAF welcomes regulation because we know that it saves lives. It saves lives because it makes certain that we are operating within the well-defined boundaries of acceptable and considered practises.

But it does come at a cost and that cost is change.

As pilots we don’t particularly like change and, as many in business also find, it makes us anxious and fearful of what is to follow. In my business change means that I’m going to have to learn new procedures, drills and checks. I’ll also have to read and learn more courseware and syllabus content and develop processes to allow me to teach it airborne.

The truth is that, as pilots, we also recognise the need for change and know that, without it, our processes will become stagnant and outdated.

‘It is not the strongest of the species that survives, nor the most intelligent; it is the one most adaptable to change.’ – Adapted from sources writing on Darwin’s “On the Origin of Species”

Problems can arise when management, contractors, partners or authority still attempt to undertake the same tasking and retain the same output whilst operating under a more restrictive system.

One example concerns the operating of aircraft in the airspace that is designated as the Valley Areas of Tactical Activity (VATA) which is used for the majority of all Hawk flying. These areas stretch from RAF Valley to 70 miles south covering almost the whole of Wales and extend from Shrewsbury out to 20 miles from the coast of Ireland.

The VATAs, including a danger area that we sometimes also use, cover almost 5,000 square miles of airspace from 10,000 ft to the upper controlled airspace at 28,500 ft (or higher if we require).

In the days of old the airspace was divided up into two areas – VATA East and VATA West, the delineation for the two being through the centre of RAF Valley. When I was an instructor on the Hawk T1 I would take my student into a VATA and would share it with other Hawks that might be nearby doing other training events such as General Handling (GH) – stalling, spinning, aeros etc. We would all be on the same radio frequency and inform each other where we were so we could de-conflict as best as possible. A typical call and response would be:

‘Valley all players, Victor 87 single Hawk GH over Porthmadog 10 to 20 thousand for 20 minutes’

We maintained our separation from other aircraft through these informative calls and a robust lookout scan. Although we sometimes had the odd near miss, generally the system was robust.

Today we have MAA regulations that provide the Station Commander with guidance for better practises and, when the MAA regulations were published in 2010, action was taken to make our flying safer.

As the MAA regulatory articles point out though, if there is something else that we could be doing to enhance safety then we must do it and, because local commanders now have to legally hold the Risk to Life within their Area of Responsibility (AoR), they will have to do it and rightly so.

As a result of MAA guidance we have re-developed the airspace into six individual VATAs and three GH areas. This allows for the allocation of aircraft to each VATA so as to de-conflict them from each other geographically so that they are not solely relying on lookout.

‘As the risk owners, Duty Holders (this is the Station Commander at Valley) shall always remain accountable for Risks to Life (RtL) within their AoR.’ – MAA RA1210

The Hawk T1 doesn’t have any collision warning system (such as TCAS) and it was felt that it would be better to have all aircraft talking to an Air Traffic Control (ATC) agency and holding an Air Traffic Service Outside of Controlled Airspace (ATSOCAS) when operating in the VATAs.

We still have to be extra vigilant, however, because the sorties we fly are still being flown in Class G airspace which can be used by anyone at anytime – civilian or military.

The issue with this is that having a VATA structure in Class G airspace can give the user a false sense of security and holding an Air Traffic Service only adds to this. I have flown in this airspace for 7 years in both T1s and T2s and today I have to constantly remind myself to prioritise my lookout as these new measures seem to promote its redundancy.

Air Traffic or the Ground Controlled Intercept (GCI) controllers will routinely give us a block of airspace to operate in, normally ‘10 to 28 thousand’ (10,000 to 28,000 ft), which allows us to dynamically manoeuvre whilst holding an air traffic service that will inform us of any nearby aircraft.

An Advanced Radar sortie starts with 3 aircraft split over 50 miles and, in an Air Combat Manoeuvering (ACM) sortie, 3 Hawks can take up 5 miles of airspace laterally and 8,000 ft vertically – it is not easy for an air traffic controller to accurately predict flight paths and give timely traffic information in this case.

On these dynamic sorties the cockpit is a busy place and sometimes an ATC traffic call is met with a ‘Standby!’ from an instructor who is inverted and genuinely cannot work out which way ‘5 miles west of you, southbound at 12 thousand’ actually is.

Routinely I see my pilots operating more as airspace managers than flying instructors as they try to control their formation in order to make the sortie a success – they become exceptionally proficient at this over time but at the expense of the instruction.

They will be talking with air traffic or GCI on their primary radio, communicating with the formation on their secondary radio and teaching the student over the intercom – a busy cockpit indeed with radio calls being routinely stepped on (transmitted over each other).

Sometimes, and it is always when you are at the limit of your capacity and trying to get the student to complete some complicated evolution, a pop-up contact is called by air traffic. Normally it is the Cardiff to Anglesey ‘Links Air’ Jetstream that will meander through your fight area at 14,000 ft trying to save fuel by not wishing to be below the VATAs and in the denser, lower air.

One of the instructors will call a ‘knock it off’, ending the fight, and we’ll all burn gas as we watch the passenger twin prop slowly progress its way towards Valley.

The truth is that they have every right to fly through our fight area, it is Class G airspace, but it’s another variable that the instructor has to deal with.

So we can see that regulation is necessary but it is how we work it in to our current processes that defines how successfully we can continue operating. Often this means that to comply with the regulations we must sometimes end a teaching serial early as a 4-ship of Typhoons pass nearby our play area or move our fight position to allow some F-15s to operate 20 miles to the west. In extremis this could mean that we have to come back home and fly the sortie another day.

‘The Only Thing That Is Constant Is Change’ – Heraclitus

This is not a bad thing because, as the pilots who fly these sorties understand, change will sometimes mean that they won’t be able to achieve the same output as before and this is the key that managers need to embrace.

It is also important that we accept change as a positive constant and embrace outright adherence to the regulations – they are there for a reason.

If only the banks had followed that last piece of advice.