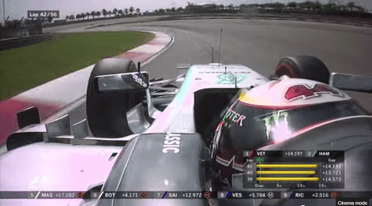 If you are reading this then you are most likely to be a high-achiever or on the road to becoming one. You see, only 10% of people read or listen to material with the sole intent of self-improvement. You probably read productivity blogs, business magazines or listen to industry leaders, in your particular employment sector, talking about the future so that you can stay one step ahead of your competition. Whatever you are doing, you are doing it because you want to be more informed and, in doing so, become more productive.

As you’ve most probably noticed, the top high-achievers seem to be calm, confident and, above all, incredibly productive. The amount they write, talk and accomplish is phenomenal. They seem to be able to do it all – they have truly mastered the art of multitasking.

How can you be as awesome at multitasking as them, for surely here lies the holy grail of productivity?

At this year’s Malaysian Grand Prix, on Lap 41, Lewis was in second place and struggling with the team’s current tyre choice and pit stop strategy. He’d recently used the radio to complain about the tyres when suddenly his team accidentally broadcast a message from Mercedes technical director, Paddy Lowe.

Hamilton responded: “I can hear you. I don’t know what I’m supposed to be doing. Paddy says I might be doing another stop!”

There was confusion in the cockpit.

But Lewis kept on pushing – he had only 14 laps in which to catch the race leader and he was only 14 seconds behind.

And then, another radio call came through. It said that if Hamilton kept pushing he could catch Vettel with 5 laps remaining.

But that one radio call almost ended the race for Hamilton. He was entering a corner when the radio call came and his attention was momentarily diverted – he struggled to keep the car on the racetrack.

‘Don’t talk to me through the corners! I nearly just went off!’ he responded to his race engineer.

Yes, real world champions – they don’t multitask. Those at the top, the high-achievers we all aspire to be, they do one thing at a time and they do it very well.

You see multitasking actually does two things to your brain; it makes you less productive and it reduces your Emotional Intelligence (EI).

Stanford University professor Clifford Nass, who studied the social and psychological impacts of media, says that multitasking and the swapping back and forth between different types of interactive media makes us less not more efficient.

“The research is almost unanimous, which is very rare in social science, and it says that people who chronically multitask show an enormous range of deficits, they’re basically terrible at all sorts of cognitive tasks.” says Nass.

He says that not only are those who multitask less productive than those who focus on one task at a time but they tend to be socially and emotionally immature and find it hard to read people in social situations. They also prefer to hide behind a text or email rather than call someone.

When was the last time you called someone instead of sending them a text?

Multitasking lowers your performance because your brain can only focus on one thing at a time, your brain works sequentially, so when you attempt to do two things at once you perform badly at both.

Let’s look at some everyday examples.

When was the last time you were driving and turned the radio off so you could concentrate? A common example is when you are driving in a busy city and looking for a parking space.

Pilots don’t multitask either – it might look like they do, but they are just prioritising a task list. Pilots have a process that organises the most important functions above the less important ones and they call this mantra – ‘Aviate, Navigate, Communicate’.

At a recent presentation I gave, to business leaders in the health industry, I told them that they need to look at what their core daily task was and priortise their focus in that area. If they strayed off their primary task and started doing other things then they must come back to it, periodically.

In flying that primary task is to ‘Aviate’ – ie. fly the aircraft.

Take instrument flying for example – when in cloud, you have to prioritise the main instrument that shows your aircraft’s attitude over all other activities. If you look away from it for a second, to change a radio frequency, check the fuel or look up details of the approach you’re about to fly you must always come back to the primary instrument else the aircraft’s attitude can change, resulting in unintentional height, heading or speed changes.

So, we are starting to see why focusing on one thing at a time is so important.

Aircraft generally aren’t very good at flying themselves when in dynamic situations and that’s why we still have pilots – for the moment, anyway! If a pilot gets distracted, especially when in formation, at low-level or taking-off or landing then crashes can happen – distraction is a killer; we prioritise the flying of the aircraft over all other things. After ‘Aviate’ comes ‘Navigate’ – knowing where you are and where you are going and lastly, ‘Communication’.

The picture in this paragraph was taken on last Friday morning just after 0800 local. I had climbed to 9,000 ft over Snowdownia National Park in Wales. I had a radio failure but it didn’t matter as I was in control of the aircraft and knew where I was. I can deal with the radio problem later.

So, when Lewis almost left the racetrack in Malaysia he was focusing on one thing – driving fast and catching Vettel. When his team made the poorly timed radio call he was instantly forced to multitask and, as we’ve just seen, humans are exceptionally poor at this.

So, the next time you find yourself trying to complete a multitude of activities just stop and think about focusing on doing one thing at a time.

Only then will you be truly on the road to becoming that calm, confident and incredibly productive high-achiever that you aspire to be.